Has this happened to you? You strike up a conversation with a complete stranger, only to discover that you share surprising connections. My own brush with this phenomenon took place recently at a conference in Canada.

I was sharing a table with two strangers – one from Israel, the other from Baltimore, Maryland – when the sitcom “The Big Bang Theory[1]” came up in conversation. As it happened, the science adviser for the show is a good friend, and I never miss an opportunity to mention this. To my surprise, I was not the only one connected to the show.

The Israeli researcher was related to one of the main actors, while the Baltimore researcher worked with my friend’s graduate school roommate. What a small world, our group agreed when we learned of these connections. We should not have been surprised.

As network scientists who study complex systems composed of many interconnected parts[2], we know that social networks connecting us through kinship and friendship are often small, in the sense that any two people within the network are connected by unexpectedly short chains made up of social links.

Whom do you know?

One way to explain the small world effect is the story of Paul Erdos, the peripatetic mathematician. Erdos famously did not pay rent or own property; instead, he spent his life couch surfing at the homes of his mathematician friends. Each visit produced a mathematical paper or two.

Remarkable as Erdos was, he was quite ordinary from the social network point of view. Anyone can be an Erdos. Let’s pick an “ordinary Joe.” His friends will have a “Joe number” of 1, their friends will have a “Joe number” of 2 and so on. In fact, unless there is something seriously wrong with Joe, half the people in the United States will be linked to him by six hops – degrees of separation – or less. Yes, it really is a “small world.”

There’s more. Not only do short chains connecting people exist, but people are surprisingly good at finding them. This was elegantly demonstrated by the sociologist Stanley Milgram in his 1963 experiment[4]. Milgram chose some people at random from the Omaha, Nebraska, phone book and gave them each a manila envelope, with instructions to deliver the envelope to a stock broker in Boston that Milgram knew. 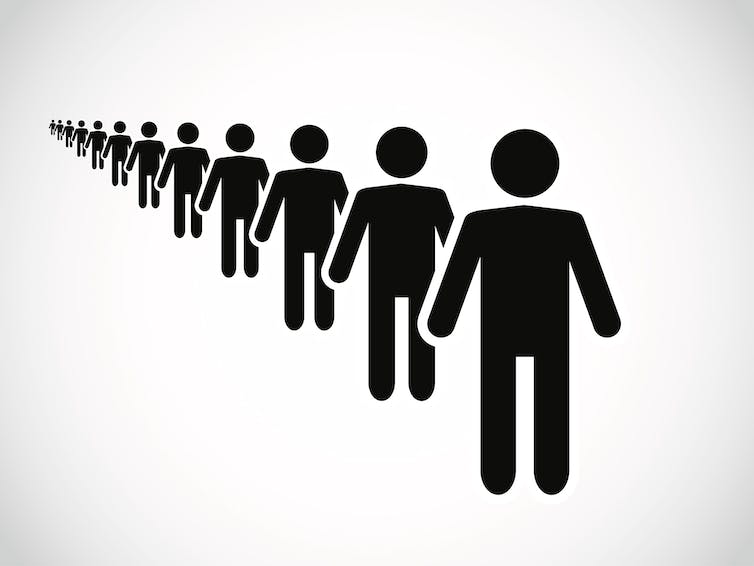 The distance between us is shrinking. Gazlast/Shutterstock.com/[5]

The instructions were as follows: “If you do not know the target, do not try to contact him directly. Instead, mail this letter … to a personal acquaintance who is more likely than you to know the target … you must know this person on a first-name basis.” The acquaintance was given the same instructions. Milgram dropped off more than 160 letters and waited. The first letter arrived within a few days. Eventually, more than 40 letters reached the target, typically requiring – you guessed it – six forwarding hops.

How were people able to find such short chains? Hints emerged already from Milgram’s experiment. When tracing the path of a letter, each hop typically halved the geographic distance to the target. As computer scientist Jon Kleinberg[6] later proved, this is consistent with how social networks are organized.

People have friends near and far, though there are fewer friends who are farther away. The long-range connections, though few and far between, help to stitch the social network together. Even if a person in Omaha, Nebraska, did not personally know anyone in Boston, they may have known someone who lives closer, like Chicago, to send the letter to, and that person would have been more likely to know someone closer to Boston, and so on. When the letter ultimately reached someone in Boston, that person would have had many local friends to choose from, one of whom may have known the target.

Social interactions have migrated online in recent years. Facebook and other platforms make it easy to keep in touch with friends both near and far. As a result, social networks have gotten smaller. In 2011, Facebook researchers[7] measured the chains of links connecting its 2 billion users: The median length was four, not six. This may explain why the entire world seems to find out about the latest news and trendy memes at nearly the same time.

Our decreasing social distance to other people in the world may also facilitate the spread of misinformation and fake news, especially when it captures our emotions or imaginations. But, it also rewards us with serendipitous discoveries of connectedness. Next time you are waiting at an airport or a bar, strike up a conversation with a perfect stranger: You may have a lot more in common than you think.

Metropolitan republishes selected articles from The Conversation USA with permission

Visit The Conversation to see more Music has always been a part of me. I grew up listening to all of the musical greats that I aspired to be since I was a young child. At 18 years of age, I participated in an important talent show... First of all, I would like to state that we are always committed and honored at Pure Mission Entertainment (PME) to use our gifts and talents to empower people and change lives. We strive every day ... “Allocai isn’t content with making music for himself alone. His songs are aimed at the widest possible audience and he’s ensured they will be heard as such and accorded the attention they deserve.” ... RETIREMENT FINANCIAL EXPERT RYAN SKINNER - A STEP ABOVE THE REST

The name of my Woburn, MA retirement services firm is Summit Financial Partners for a very good reason -because the clients I work with have either reached their retirement summit (i.e. they’re re... In an office that a dishwasher is being used communally, it is pretty difficult to set rules on how a certain appliance needs to be taken cared of. A dishwasher is a responsibility of no one until you... Everyone is working very hard to secure their financial freedom. Most of the people find it hard to support their family even after having a 9-5 day job. For this very reason, people often look for ... The industry of human relations is vitally important to the health and prosperity of a business.   Whether they are operating in textile manufacturing, accounting, sports, IT development or hospit... 4 Easy Steps To Gaining SEO Momentum For Your Business

SEO (search engine optimisation) does not have to be a tiresome and overbearing exercise that diverts attention away from the core functions of a business.   SEO Shark affirms this as a smart and ...